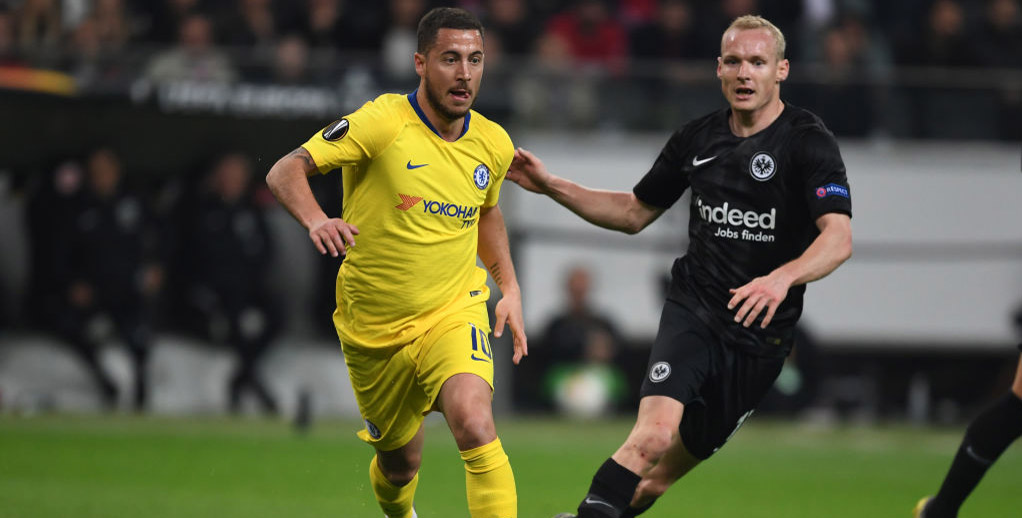 Chelsea are firm favourites to reach the Europa League final after drawing 1-1 with Eintracht Frankfurt and justifiably so, judged on what we saw in Germany.

The Blues had to come from behind at Commerzbank Arena but looked much the better team when growing into that game after levelling on the stroke of half-time.

We expect Maurizio Sarri’s side to control proceedings in London and 27/20 for a home win to nil is our initial Chelsea vs Eintracht Frankfurt prediction.

Chelsea will feel that they should have come away from Frankfurt with a victory following a clutch of missed chances.

David Luiz hit the bar with a wicked free-kick and headed straight at the keeper after being set up by substitute Eden Hazard.

Pedro also had a couple of opportunities to add to his equaliser and Ruben Loftus-Cheek tested Kevin Trapp.

Sarri said: “We started to play after 25 minutes and played very well. We deserved to win for the number of opportunities.

“We were in control of the match for 70 minutes and should have won, but 1-1 is not so bad away.”

Sarri is well aware of how dangerous Frankfurt can be on the counter-attack, but having 67 per cent of the possession in Germany is a promising stat.

Looking at the Chelsea vs Eintracht Frankfurt odds, we like 13/2 for the Blues to claim a clinical 2-0 triumph at Stamford Bridge.

N’Golo Kante will miss out due to a hamstring problem, while Antonio Rudiger and Callum Hudson-Odoi are long-term absentees.

Luka Jovic showed why he is attracting attention from a host of elite-level clubs when putting Frankfurt ahead in the opening encounter.

The 21-year-old Serbia international deftly nodded in Filip Kostic’s cross for his ninth strike of this season’s competition.

However, after being inspired to make a fiery start by their enthusiastic supporters, the Bundesliga outfit found it tough going against more accomplished opponents.

“Chelsea at Stamford Bridge will be the great favourites, that’s for sure, but everything is still possible,” commented Eintracht boss Adi Hutter.

“But after the goalless draw here against Inter, no-one thought we could go to Milan and win. That’s how we have to act in London; be confident, brave and courageous.”

We fear this may be a step too far for this developing club, though, so 21/20 for the hosts to oblige by more than one clear goal completes our Chelsea vs Eintracht Frankfurt betting tips.