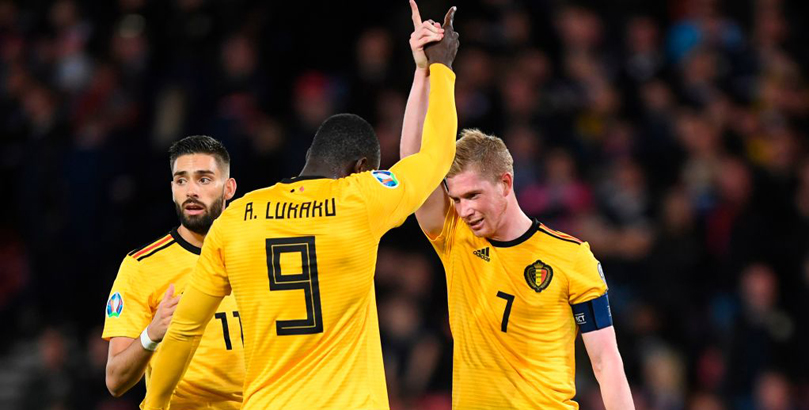 With the group draw made for the finals, we’ve taken a fresh look at the Euro 2020 winner odds and updated our power rankings for the leading contenders, with a new champion tipped to lift the trophy.

This will be the 16th European Championship and UEFA is breaking new ground by staging the tournament in 12 cities in a dozen different countries.

However, both semis and the final will be staged at Wembley Stadium in London, with the decider scheduled to take place on July 12.

Here are our Euro 2020 predictions regarding which teams can challenge for outright glory:

The Red Devils had to settle for third place at Russia 2018 after being edged out by France in the semi-finals, so the quest for a first major trophy goes on, but hope springs eternal and this could be the time to get on Belgium.

Some members of their golden generation are starting to age, but Romelu Lukaku has been rejuvenated by a move to Inter Milan, Eden Hazard is settling in nicely at Real Madrid and Kevin De Bruyne remains a class act for Manchester City.

Roberto Martinez’s men enjoyed a perfect 10 straight wins in qualifying, with 40 goals scored and just three conceded, including 3-1 and 4-1 triumphs against Russia, who will re oppose in Group B, alongside Denmark and Finland.

Les Bleus were runners-up in the last renewal of this competition and went on to go one better at the 2018 World Cup, with Didier Deschamps leading a disciplined outfit to success.

Established stars such as Antoine Griezmann, Paul Pogba and Raphael Varane are still under 30 and at their peak, while prodigious youngsters like Kylian Mbappe and Ousmane Dembele can surely only improve.

Qualifying went relatively smoothly, with eight wins and a draw from 10 games, although only taking one point off Turkey is a concern, while Portugal and Germany will be tough Group F opponents.

Gareth Southgate’s exciting young side made the World Cup semis and then showed there is still scope for more improvement when finishing third in the Nations League.

Harry Kane, Raheem Sterling, Marcus Rashford, Dele Alli and Jordan Pickford were all under 25 at Russia 2018, so the spine of this team should only get stronger, while starlets like Trent Alexander-Arnold, Jadon Sancho and Tammy Abraham are coming through.

The Three Lions won seven of eight qualifiers, with a whopping 37 goals scored, although the Czech Republic beat them 2-1 in Prague and will feature in Group D alongside Croatia.

Having home advantage in the closing stages has to be a boost, but injuries to Kane and Rashford must clear up before we can rate England as worthy favourites.

Die Mannschaft have hinted they are ready to bounce back from a woeful run of results in 2018, when finishing bottom of their World Cup group and Nations League pool.

That sequence included just one win in seven competitive fixtures, putting the pressure on Joachim Low to turn things around, especially after putting Thomas Muller, Mats Hummels and Jerome Boateng out to grass.

Seven wins from eight matches in qualifying was a solid start, even if the Netherlands did avenge a 3-2 Amsterdam defeat with a 4-2 Hamburg success.

History dictates that Germany must be respected in this event, having been crowned champions three times and reaching the semis on nine occasions, although they are in a tough Group F with France and Portugal.

La Roja have faltered at three straight major tournaments since completing back-to-back wins in this competition in 2012, with a World Cup victory splitting those triumphs.

Spain looked back on track when going unbeaten through their qualifying pool, posting eight wins and away draws against Norway and Sweden.

Inspirational captain Sergio Ramos is at the veteran stage of his career, but can help steer them through a safe-looking group.

Ronald Koeman has awoken this sleeping giant of international football and they seem to be growing in stature and confidence all the time.

A series of promising performances in the Nations League set the tone, with England beaten in the semis.

Virgil van Dijk is a rock at the back, Luuk de Jong, Memphis Depay and Quincy Promes have come of age up front, while Frenkie de Jong and Matthijs de Ligt could be potential superstars.

Swapping away wins with Germany in qualifying highlights how the Dutch are still capable of blowing hot and cold, but more and more experts are becoming convinced they will be a major force this summer and they have been handed a kind draw.

Failing to qualify for the World Cup was seen as a national disaster, so the Azzurri are clearly fired up to make amends with a first European Championship success since 1968.

Roberto Mancini secured some solid Nations League results with a young squad and Italy were clinically efficient in reaching this event, registering 10 straight victories, with 37 goals for and only three against.

The quality of their opposition in that campaign was questionable, but Switzerland, Turkey and Wales will be seen as beatable rivals in Group A at the next stage.

The defending champions only finished second in their qualifying group, behind leaders Ukraine after a 2-1 loss in Kiev last October, but do have a fine record in this tournament, having also been runners-up in 2004 and semi-finalists in 2012.

Obviously, the big worry is that Cristiano Ronaldo will be 35 when Euro 2020 takes place, but he did hit a hat-trick versus Switzerland en route to Nations League glory and struck four times in September’s 5-1 romp in Lithuania.

The likes of Bernardo Silva, Andre Silva, Joao Felix, Renato Sanches and Gelson Martins are also capable of taking on more responsibility, while this is a team with a strong work ethic, but drawing France and Germany is another concern.

Many punters will see the Blazers as a value option, judged on their Russia 2018 exploits, when only losing out to France in the final.

A thrilling home win over Spain in the Nations League also showed what this team is capable of, but we just fear Ballon d’Or hero Luka Modric, Ivan Rakitic and Ivan Perisic are not getting any younger.

That concern also applies to some key defenders and there were mixed results in qualifying despite topping their group, although the draw for the finals is a fair one, with Croatia expected to advance alongside England.

Stanislav Cherchesov’s side performed with credit in the World Cup on home turf and picked up eight wins in 10 qualifiers, with the only losses coming against Belgium.

Some of the victories were merely workmanlike, but captain Artem Dzyuba keeps banging in the goals and there is great unity in this squad.

Switzerland, Wales and Denmark are others pushing for a top-10 spot, but Russia remain just ahead of them in our ratings and are tipped to follow Belgium through again in Group B.

Swansea vs QPR: Swans to come good in the end
Cheltenham 2020 tips: Five Irish fancies for this year’s Festival
Author