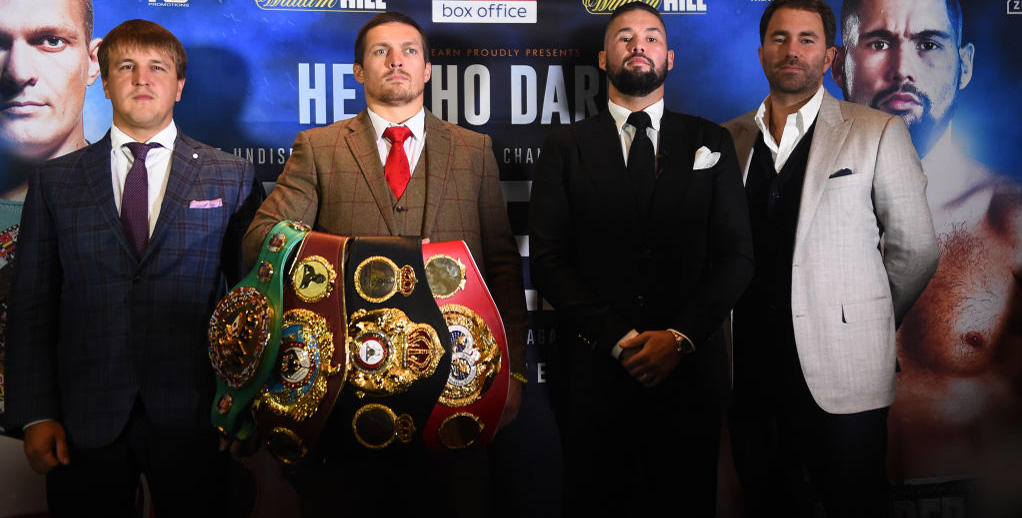 Tony Bellew is no stranger to upsetting the odds but we fear he may have bitten off more than he can chew by taking on undisputed cruiserweight champion Oleksandr Usyk.

The Ukrainian southpaw will defend his WBC, WBA, IBF and WBO world titles at Manchester Arena and is widely regarded as one of the best pound-for-pound fighters on the planet.

We’re confident The Cat will prove a class apart on Saturday night and like 3/2 for him to record a convincing points win as our Usyk vs Bellew prediction.

Usyk was already a star in the amateur ranks before turning pro, claiming gold medals in the heavyweight division at the 2011 World Championships and the 2012 Olympics.

Since joining the paid ranks, the 31-year-old has reeled off 15 straight wins, securing the WBO belt by outpointing Poland’s Krzysztof Glowacki in his own back yard in just his 10th bout.

He added the WBC crown to his trophy cabinet with a close decision over the much-vaunted Mairis Briedis in Latvia in January.

WBA and IBF kingpin Murat Gassiev was then given a boxing lesson in Moscow over the summer, although Usyk again settled on prevailing via the judges’ scorecards.

Cleaning up the division during the World Boxing Super Series has put The Cat on a pedestal and proven he can cope with hostile home crowds.

A commanding jab and high work-rate can help Usyk to control proceedings against Bellew, who drops down from heavyweight after two victories over David Haye.

Bellew insists: “He’ll have to work for it!”

Those triumphs improved Bomber’s record to 30-2-1, with his last defeat coming when stopped in the sixth round by WBC light-heavyweight title holder Adonis Stevenson.

That is the only time the durable Merseysider has lost inside the distance and he improved enough when stepping up to cruiserweight to become a world champion himself.

However, the 35-year-old has not fought at this weight or level for two years and the worry is that he merely timed it right when taking on a fading star in Haye.

Now it is Bellew who must turn back the clock in what he has vowed will be his final bout and we fear Usyk will be just too sharp at this stage of their respective careers.

Bellew is full of respect for his opponent and told Sky Sports News: “I have nothing to lose going into this fight, nothing whatsoever.

“He’s in with a shout of being the best cruiserweight of all time because he’s done what no other cruiserweight has ever done before – he’s holding all four belts and the ring magazine belt.

“I think he’s the most formidable fighter – one of them anyway – on the planet. He just keeps beating people easy.

“But one thing I will say, he ain’t beating me easy on Saturday night, he’ll have to work for it if he is going to win.”

However, it is a tell-tale sign that Bellew’s promoter Matchroom Boxing has signed Usyk up to a long-term deal and that can prove a shrewd move.

Join bwin today and receive up to £20 money back as a FreeBet if your first wager at odds of 1/1 (2.0) or greater is a loser! Terms and conditions apply.