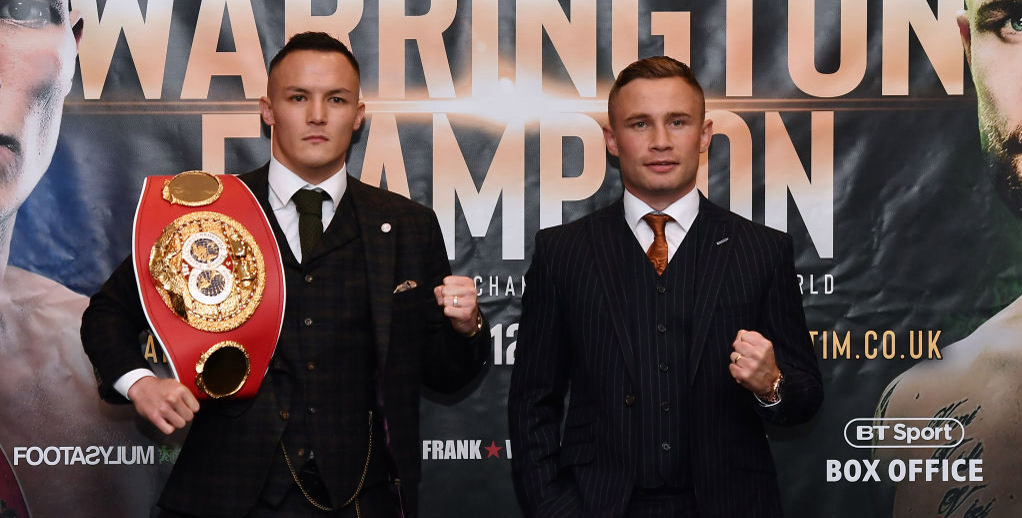 Carl Frampton looks a worthy favourite to prise the IBF featherweight title away from Josh Warrington at Manchester Arena on Saturday night.

The 31-year-old Belfast fighter may be the challenger, but he has mixed in much better company than the champion, who is three years his junior.

Almost two years after surrendering the WBA belt, the Jackal insists his ambition burns brighter than ever and gets a confident vote to prevail at 21/50 as our first Warrington vs Frampton prediction.

Leo Santa Cruz handed the Northern Irishman his only defeat in 27 pro bouts via a tight, majority decision at the MGM Grand in Las Vegas.

Frampton had previously claimed victories over Scott Quigg at this venue and Santa Cruz in Brooklyn to secure The Ring magazine’s prestigious Fighter of the Year award for 2016.

Following three straight rehabilitation wins on home turf, he is adamant the time is right to reclaim a version of the 126lbs world title.

“My ambition is probably there more than ever, because I’ve been written off,” declared Frampton, a former WBA and IBF super-bantamweight champion. “I want this title more than I’ve ever wanted a title.

“There are people out there who have doubted me and people who think that I’m done, and this will be sticking the fingers up to them and saying there’s plenty left to give.”

Jackal rejuvenated by change of camps

Frampton reiterated his belief that he is a superior fighter since switching coaches from Shane McGuigan to Jamie Moore last year.

He added: “I was beating guys like Santa Cruz and even Quigg when I wasn’t really enjoying boxing. If I’m being honest, I hated it, but I was still getting big performances.

“But now I’m enjoying it. Now I look forward to the gym, now I put in maximum effort in training sessions, I’m switched on, I have a much smarter approach through my camps.”

Warrington boasts a 27-0 record and is making the first defence of the crown he wrested from Lee Selby at his beloved Elland Road in May.

He insists he was not tempted to take the easy road of a soft defence and has his sights set on unifying the division next year.

“I want the big fights,” stated Warrington. “I believe I’m capable of beating any featherweight. I want to fight the best and talk of unification excites me. I wouldn’t want a steady one after this one either.

“I want to go straight over to the States and fight the likes of (WBO champion) Oscar Valdez. I’m loving the occasion, the camp, the build-up.”

The proud Yorkshireman will not go down without a fight, but we still believe 6/5 for the Jackal to prevail on points is the way to go with our Warrington vs Frampton betting tips.

Join bwin today and receive up to £20 money back as a FreeBet if your first wager at odds of 1/1 (2.0) or greater is a loser! Terms and conditions apply.