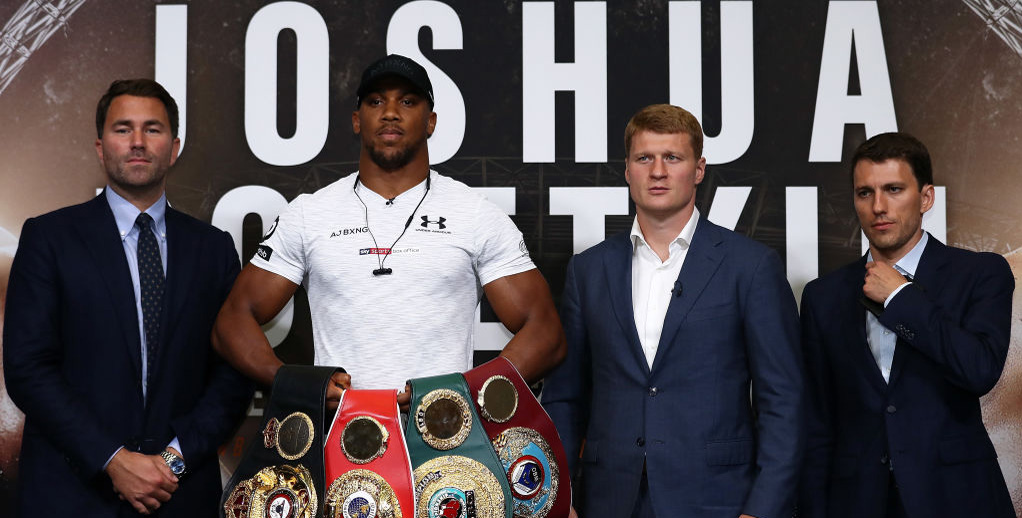 Anthony Joshua is expected to maintain his unbeaten record against Alexander Povetkin at Wembley on Saturday and can become the first fighter to stop his Russian opponent.

AJ was taken the distance for the first time in 21 fights before beating Joseph Parker on points in Cardiff at the end of March but can get back on the knockout trail in London.

The challenger’s only loss came via the judges’ scorecards versus Wladimir Klitschko and he won’t go down easily, but 7/4 for him to bow out between rounds five and eight inclusive is our main Joshua vs Povetkin prediction.

Joshua hinted he is preparing for a tough assignment, as he returns to the scene of last year’s epic defeat of Klitschko.

The 28-year-old told Sky Sports: “This fight, the key to victory with me is relaxation, belief, having your energy reserves intact.

“I’m just trying to say I need to be a bit more effective and sharp with my punches in this fight.

“It’s a difficult fight when you are fighting someone like Povetkin, because it’s like a game of chess.

“Violent chess, because they are waiting for you to make a move, so they can counter you.”

With the stakes so high ahead of a potential mega-money clash against Deontay Wilder or Tyson Fury in 2019, Joshua is unlikely to take too many chances early on.

However, he can make the most of a big size advantage to soften up Povetkin and then put him away in the middle rounds.

Povetkin was pummelled by Klitschko

Like Joshua, Povetkin was an Olympic gold medal winner during a stellar amateur career which also brought two European titles and a world championship win.

As a pro, the Russian won his first 25 fights, beating Ruslan Chagaev to claim the WBA title in 2011 and defending that belt four times before suffering an emphatic points loss to Klitschko.

Notably, the White Lion was floored in the second round in that Moscow clash and had to climb off the floor three times in the seventh.

He showed great courage to hang in there until the final bell, but Klitschko was content to coast through the latter stages and Povetkin may struggle to fend off a more ruthless foe like Joshua.

Punters can get 33/50 for the bout to last less than nine rounds and that price stands out from the Joshua vs Povetkin odds.

For those wanting a bigger pay-out, let’s go with 8/1 for AJ to get the job done in round six to complete our Joshua vs Povetkin betting tips.